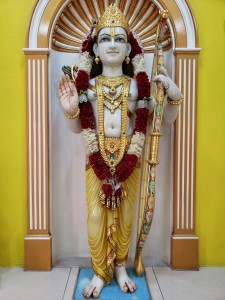 I gracefully clasp and wash the feet of Shri Ganesh Ji and pay reverence to him by annointing my forehead and now commence writing praises of Shri Ramchandra Ji whilst meditating on Anjani’s son, Shri Hanuman Ji.

I praise the deeds of Shri Ramchandra Ji after invoking him into my heart and bowing at the feet of Shri Shiva Ji, who destroyed Kamdeo (Cupid), so that the impurities and errors of my heart be destroyed.

Wherever You are praised there shall be no bodily suffering or pain. Those who develop love for You in their hearts, are very fortunate.

Hey! Shri Ramchandra Ji, destroyer of demons and their armies … including Ravana, Tadaka, Maricha, Subahu, Viradha and a host of others … all glory to Thee. You are the most merciful deliverer of the lowest of the low … as Sabari (member of the Sabaris tribe), Guha (a Nisada … low born tribe in early India) and others. Thus, those who daily chant, recite or sing the Your praise, hey Shri Ramchandra Ji, You grant them their heart’s desire.

Hey Shri Ramchandra Ji, Your lotus-eyes fascinate even the Munis and Rishis; Your head adorned with a lustrous crown and the brilliance of Your face and tender body. I behold too, hey! Shri Ramchandra Ji Your no less brilliant, crocodile shaped pendants, on Your ears.

My own mind that rambles … wander from thought to thought … all the time, must be brought under control to meditate, night and day, on the Your changeless form, so that my earthly desires that burn ceaseless within me could be subdued, since the kingly palace of which I dream will not accompany me in the end, but remain as an unfullfilled desire.

Hey Shri Ramchandra Ji! Your name, RAMA, brings peace and love and comfort on the ultimate journey; when earthly pleasures pursued and dreamt about will not be of any avail or use … for these are but a mirage, but deeds performed will be heard by Shri Ramchandra Ji and the righteousness of those deeds will be counted.

Those who uphold and meditate on Shri Ramchandra Ji’s glorious deeds in their hearts at all times are the ones who will get the honeyed taste of Rama as bees do from the pollen of flowers. Then the glorification of Shri Ramchandra Ji’s name, Rama would be realised and the process of detachment from earthly attachments commence.

On those who adopt such a path, Shri Ramchandra Ji, the compassionate and merciful, would shower his blessings and fulfill their desires. Recall that Shri Ramchandra Ji defeated the demons in a blink, just as massive trees are reduced to ashes in a forest wildfire.

Shri Ramchandra Ji killed Ravana and his host and yet sent them to His celestial abode. He also killed Mahiravana of the lower regions. Rama’s arrows are like the waters of the Ganges, it purifies and redeems the vilest of sinners.

Omnipresent Shri Ramchandra Ji permeates the infinite and endless world … He is within and without the Universe … and this state of Shri Ramchandra Ji’s seemingly phenomenon continues to elude description by the scriptures or even the saint and sages. Those who forget the name of the omnipresent, Shri Ramchandra Ji summon utter ignorance of His virtues that illuminate the path of life’s journey.

Without Shri Ramchandra Ji’s presence in our hearts, all seems dark and the mind suffers untold frustration … in troubled times one feels so helpless, hopeless and very much alone, this is moreso where hearts filled with earthly desires left no room for the Supreme Atma to peek even a single ray of light, within. One need to understand that it is Shri Ramchandra Ji who is the beginning and beginningless at the same time and it is His praise Shri Shiva Ji and the Devas sing.

Brahma, the creative aspect of the Supreme Being has become fathomless with the chanting of the name of Shri Ramchandra Ji. Sesa narg … the serpent king … too, was able to uphold the earth’s burden on its head. Sambhu … Shri Shiva Ji … with Rama’s form embedded in his heart, gulped down the jar of poison that emerged during the churning of the sea by the joint effort of the assuras and devas.

Having observed the name of Rama scribbled on the earth, the great Lord Shiva made Ganesh highly venerable (so much so that all ceremonies begin with worship his worship). The bliss filling the heart with devotion to Rama is all pervaded by Him. Chanted with profound interest it opens up the gates of devotional love.

When Shri Ramchandra Ji reigns in the heart of anyone, that person becomes devoted to Rama as Mahavira (Hanuman). Those who seek refuge in Shri Ramchandra Ji, crosses the oceans of trials and tribulations as did Mahavira … Hanuman with Rama in his heart crossed the ocean on his way to Sri Lanka in search of Sita Mataa … and thus escapes the cycle of birth and death.

Chanting of Shri Ramchandra Ji’s praise destroys all wordly distress. The source of all happiness and well-being is His mantra, Om Shri Ramchandra Ji aaya namaa. Those who do not seek refuge in Him, even by chanting his name, Rama, has develish ways and is utterly ignorant.

To what extent shall I sing praises of Shri Ramchandra Ji’s deeds? I am so dull-witted and surely cannot fathom the immeasurable depth of His deeds, yet I have tried to recite His deeds in this Chalisa with my mind centered on Shri Shiva Ji, the beloved consort of Gauri.

In Durvasa hermit, near Prayag in Allahabad, I Sundardasa composed this Chalisa, knowing that those who recite this Chalisa with devotion everyday, shall be rewarded with what they desire most.

I pray that my mind with unwavering devotion meditate on Shri Ramchandra Ji’s name so that I may detach myself from jealousy, dullness and sufferings.